The PEM system is among the most environmentally safe solutions to beach erosion control and it is used in European Habitat Areas. It may be used in combination with beach nourishment to retain sand, or as a stand-alone solution if enough sand is available in the system.

Over time, sand will build up forming a slight convex shape. The surplus of sand will be transported by the wind further onto the beach and eventually to the dunes. This provides protection for the dunes and bluffs in the event of a storm.

The cost of using PEM is much lower than traditional erosion control. More miles of beach can be protected for the same money.

Turtles come to the beach at night to dig a nest and lay eggs. If a beach has a large scarp/sand wall the turtle may not be able to get past the scarp and reach the dry sand. It will settle on digging a nest on the wet beach or give up. In either case there will be no new turtles.

If the temperature of the sand rises above normal more female turtles may be produced.

Studies of beach temperature and humidity have been conducted in Hillsboro Beach, Florida during a full scale PEM installation. The PEM area was compared to the 2 control areas that had no PEMs installed. The study was conducted by Dr. Curtis Burney, Ph.D. of Nova Southeastern University.

It was not possible to document any significant differences in the temperature of the sand in the PEM area and the control areas, and it was concluded that the PEMs had no influence on the conditions for the turtles. If the PEMs were “drying out” the sand this would have resulted in a temperature difference.

The section of the beach where PEM was installed became the most popular nesting ground for Green Turtles in Broward county.

The Nova Southeastern University report can be obtained here

The PEM system does not change the birds roosting or foraging behavior.

Many birds such as Piping Plover feed in the swash zone. During falling tide when the water recedes the birds need to move towards the sea in order to be in the same relative position to the swash zone. 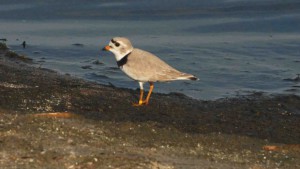 The tide recedes for 6 hours twice a day. On most beaches, it takes a little longer to reach low tide as layers formed in the beach slow down drainage. It is this "slow-down" effect that causes erosion and that the PEM system is designed to eliminate.  As an example consider a beach that have used 6 hours and 30 minutes to dewater.  After the installation of PEM, it dewaters in 6 hours.

From high to low tide used to last 390 minutes. After the PEMs are installed it takes 360 minutes.

When a PEM system is installed the beach will dewater slightly faster than previously, which means that the swash zone will move towards the sea slightly faster.

The invertebrates in the beach that move with the tide will move as previously.

The birds feed on many types of beaches. The width of a specific feeding ground and the rate at which it moves with the tide depends on the steepness of the beach face, tide cycle, wind, rain, the composition of the beach etc. With many variables, it is unlikely that a bird would notice any change at a particular beach after the installation of PEM.

CO2 is a greenhouse gas that is emitted whenever fossil fuel is used. Projects involving use of diesel or gasoline contribute to CO2 emission.

Sand for beach nourishment may come from different sources. If the volume is limited it is often most cost effective to truck sand from a nearby a quarry. If the project is large it will pay to use a dredge provided a suitable borrow site can be found. The following example is from a small project using trucked in sand.

CO2 will be emitted from

CO2 emission from a similar PEM project will involve using an earth drill on a light truck or a water pump for jetting PEMs into the sand. In any case the PEM installation will use less energy that is used for spreading out the sand on the beach during traditional nourishment.

In the following calculation only CO2 emissions from trucking sand is used in the calculation.
Data are from a Feasibility Study by Olsen Associates 2011 in relation to Broward County FL, Segment 2.

Total emission from transporting sand is 1600 tons CO2. To this hall be added fuel used during excavating, staging and spreading sand.

If the PEM system is used to prevent beach erosion and is able to reduce erosion in the order of 100,000 cubic yards (which is a low figure for PEM) that would otherwise be placed using trucked in sand, then the emission of CO2 will be reduced by at least 1600 tons.