For the past decades, Beach Nourishment has been the predominant method to deal with beach erosion.

Sand is harvested from the sea floor and delivered to the beach through pipelines. On the beach bulldozers spread out the sand.

In many areas, available sand in the ocean is becoming scarce and focus is turning to inland sand sources. This may involve hundreds of trucks travelling on open roads with sand. The method is expensive, and previously only small projects used trucked sand. However, recently even large projects in Florida were awarded to companies using trucked sand, because nearby offshore sand sources had died out. 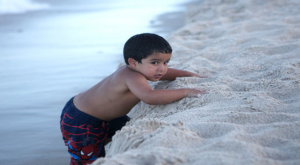 A scarp can be a challenge to “small creatures”

The idea of beach nourishment is to “oversupply” the beach with sand to build a sand buffer. Over time the surplus will wash away. Because of the oversupply, the beach is not in balance and scarps are created that act as sand walls that turtles or even children can’t pass, and they get trapped between the scarp and the sea.

Sand dredged from harbors and inlets are often used on beaches, however the quality is often poor compared to natural sand.

Not everyone is thrilled by beach nourishment which this article is an indication of.

In an effort to get more sand creativity is blossoming. Experiments have been made using crushed glass bottles and plans are considered to import sand from the Caribbean Islands.

Beach Nourishment is popular, as it delivers instant results and you see what you get. However, it is expensive and has to be repeated, and causes scarps as the sand is washed away.

Groins and Jetties are structures perpendicular to the beach. They limit the loss of sand up-drift of the structure however the beach down-drift will erode because sand is forced far away from the coastline. Groins often cause conflicts between neighbors and are expensive to construct and remove. In many areas, Groins are prohibited.

Breakwaters are low groin structures constructed parallel and close to the shoreline. They slow down the waves and by that the waters ability to transport sand, which reduces erosion. The disadvantage is that the beach looks artificial and the structures cause turbulence that creates large holes at the end of the breakwaters that are dangerous to bathers, especially children.

Seawalls or revetments may protect the upland for a while, but the beach will erode rapidly in front of the seawall due to the turbulence caused by the wall.

Large Buried Sandbags may act as a last line of defense in case the beach is washed away by a storm.

The PEM system is radically different than all of the above technologies. It optimizes the beach ability to drain, and by that reduce the number of hours where the beach is wet and prone to erosion. As a result, more sand is deposited on the beach, from where it blows to the back beach and the dune.

PEM will work alone or in combination with other technologies including all of the above.

The PEM system does not create scarps or down-drift erosion and is price competitive. It is robust as it consists of hundreds of independent tubes installed vertically. Even if many of the modules are removed the system will still operate.

Active dewatering was developed in the 80’ies by coincidence. Saltwater was pumped via an undersea horizontal porous pipe near shore to a nearby aquarium when a tombola developed. Later models used porous pipes buried horizontally along the beach in the swash zone. A pump evacuated water which was led back to the sea. The system works provided there are no storms; however it uses lots of energy. The biggest problem has been storms, where the entire system goes down if a part of the tube is exposed. Once down it takes months to get going, and previously accreted sand will be gone by then. As a consequence, it is rarely used.